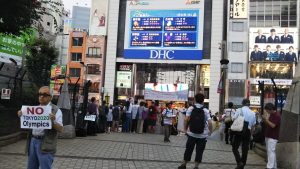 The Olympic Games are a sport mega event, which during the last decade has not only been increasingly criticized, but which saw its ideological and philosophical foundations questioned. Due to increasing protest from the general population, especially in potential host cities and countries, the IOC finds it ever more difficult to find candidate cities for its summer and winter games. Despite a general change in the perception of the Olympics, protest against hosting the 2016 and subsequently the 2020 Games in Tokyo was hardly visible. This can be explained by the fact that the history of the Olympics serves as a positive lieu de memoire, which is discursively linked to ideas of Japanese economic growth, innovation, national recovery, peace and healthy bodies. This positive narrative has been disseminated by national and international press, politicians, IOC, JOC (Japanese Olympic Committee). The Tokyo bids for the 2016 as well as 2020 heavily relied on these “positive” legacies to support their claim to once more host the Olympic Summer Games in Japan. Yet there is a forgotten and hidden side of the Japanese Olympic history that has so far not been told or is underrepresented in public as well as in scientific discourse. This international conference aims to critically approach and challenge the dominant narrative in Japan, by offering an alternative story that is one of nationalism, ecological disaster, protest, marginalization, discrimination and gender-inequality.

The conference will be in English and Japanese. Papers will be invited based on topic, scientific merit and interdisciplinary approach in questioning the official narrative of the Olympics in Japan.